“On July 13, 2021 at approximately 0700 hours, PG&E’s outage system indicated that Cresta Dam off Highway 70 in the Feather River Canyon lost power. The responding PG&E troubleman observed from a distance what he thought was a blown fuse on the PG&E Bucks Creek 1101 12kV Overhead Distribution Circuit uphill from his location. Due to the challenging terrain and road work resulting in a bridge closure, he was not able to reach the pole with the fuse until approximately 1640 hours. There he observed two of the three fuses blown and what appeared to him to be a healthy green tree leaning into the Bucks Creek 1101 12kV conductor, which was still intact and suspended on the poles. He also observed a fire on the ground near the base of the tree. The troubleman manually removed the third fuse and reported the fire, his supervisor called 9-1-1 and the 9-1-1 operator replied they were aware of the fire and responding. CAL FIRE air support arrived on scene by approximately 1730 hours and began dropping fire retardant and water…In a 2045 hours status report, the CAL FIRE website stated the fire was approximately 1-2 acres; later that evening CAL FIRE reported the fire had grown to 10-15 acres and ground resources had problems accessing the area. According to the CAL FIRE website as of July 18, 2021 at 2007 hours, the Dixie Fire ahs burned approximately 19,000 acres and dis 15 percent contained…On July 18, 2021, CAL FIRE investigators collected the following PG&E equipment: portions of the Bucks Creek 1101 12kV line, including conductor, jumpers, insulators, and fuse cutouts, as well as portions of the tree.”

On August 2, 2021, PG&E filed another Electrical Incident Report with the CPUC concerning the Fly Fire as follows:

“On July 22, 2021, a wildfire began in the area of Butterfly Valley Twain Road and Highway 70 in Plumas County, California (the Fly Fire). At approximately 1701 hours on July 22, 2021, wildfire cameras first showed smoke in the general direction of Butterfly Valley Twain Road and Highway 70. According to PG&E’s records, SmartMeters and a line recloser on the portion of the PG&E distribution line serving the area, the Gansner 1101 circuit, reported alarms and other activity between approximately 1650 and 1810 hours, when that portion of the line was deenergized. On August 2, 2021, PG&E assisted the U.S. Forest Service (USFS) with moving and examining a tree that was resting on conductor on the Gasner 1101 circuit.”

On July 21, 2021, the Hon. William Alsup, United States District Court, issued an order directing PG&E to file a statement under oath setting forth the full extend to which its equipment had any role in the start of the Dixie and Bader Fires. On July 28, 2021, PG&E filed its response, which included the photo below of the pine tree which fell on its energized conductor at the origin of the Dixie Fire: 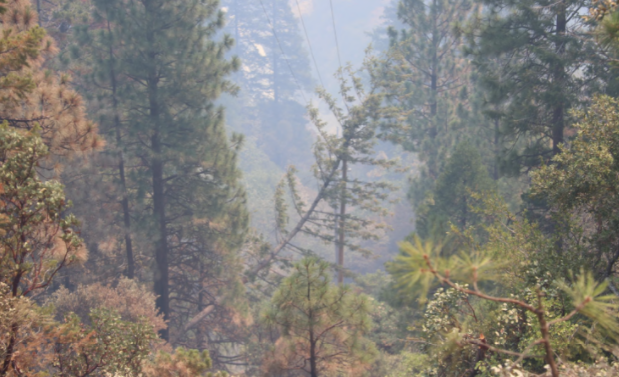